First Sentier Investors are a global asset management company with a client base across Asia, Australasia, Europe, and North America.

Following a recent sale from their parent company, the organization underwent a rebrand as a stand-alone business, while relocating to a new workplace in Sydney’s recently rejuvenated Barangaroo precinct.

Their new home called for a suite of signage, wayfinding and environmental graphics that would reflect the company’s core values while harmonizing with the aesthetic of their office interiors.

Key to the architectural design intent was the Japanese concept of wabi sabi, a worldview centered on the acceptance of transience and imperfection.

The idea of crafted spaces and handmade materials was a cornerstone of the interior design, which also used careful illumination to draw attention to aspects of the interiors.

As the company was undergoing a complete rebrand during the construction of their new office, the environmental graphics couldn’t rely on any traditional brand cues, and so the interior design narratives became the basis of the work.

Playing off the idea of illumination and layering, THERE developed a series of large-scale wall and glazing treatments designed to look like abstract beams of light falling on the timber and glass panels that lined the core of the building. The simple geometric shapes and patterning were a nod to the modernist interiors, while also being akin to traditional Japanese design. Graphics were intentionally placed so that they fell perfectly over different substrates, and subtle color changes created a sense of shifting light patterns as they transitioned around the floor. A delicate sense of illumination plays out through minimalist graphic installations. 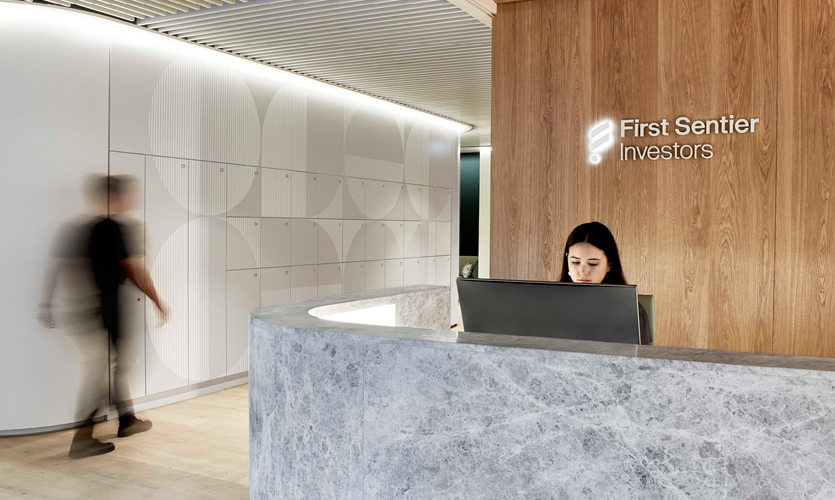 Graphics are used to delicately complement the interior design scheme. 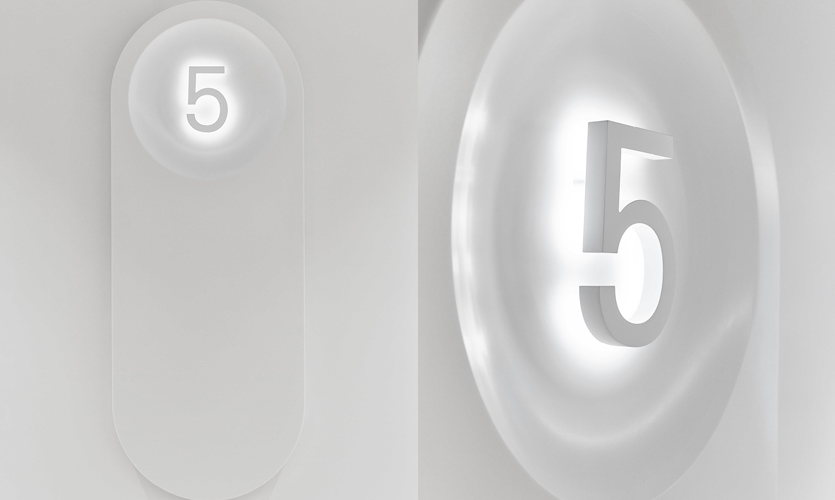 In the elevator lobbies, beautifully sculpted level identification signs made from Corian welcomed visitors on arrival, with integrated LEDs giving the numerals a halo-effect in light. Meeting room identity signs were incorporated into glazing treatments, but perfectly positioned in the space so that they aligned to the feature door handles. 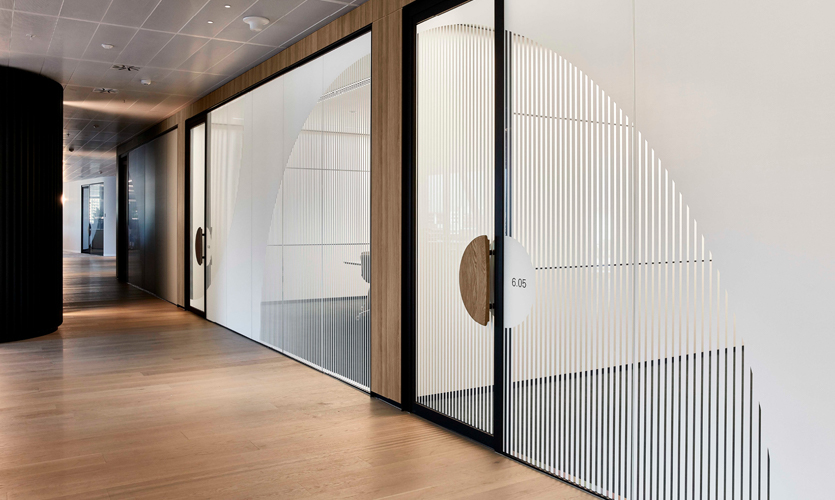 Graphics were intentionally positioned to fall across multiple surfaces, and conceal or reveal different spaces. 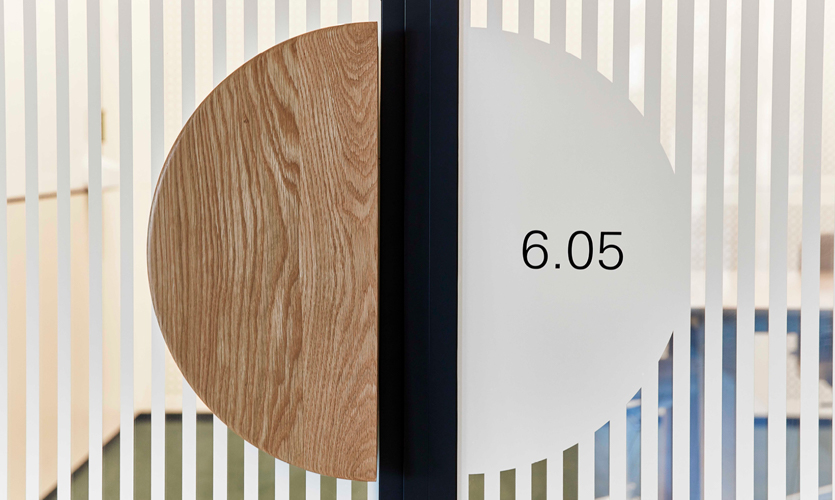 Perfectly placed signage to balance with the interior design features. 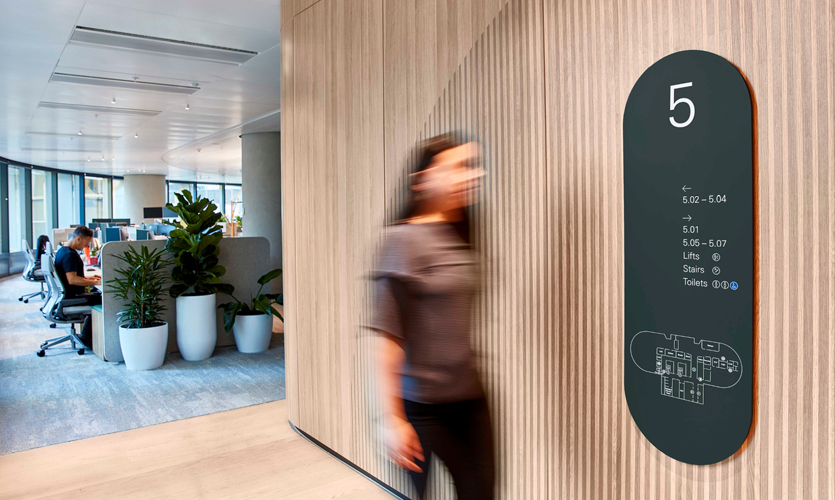 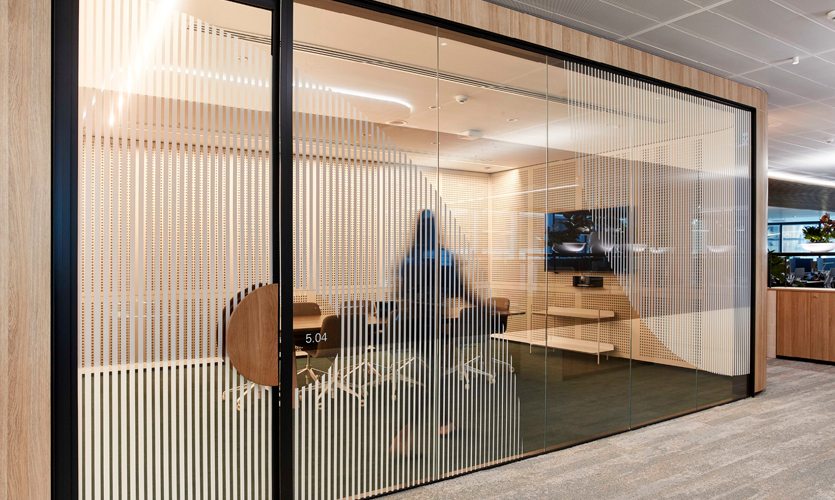 The outcome was a simple layered scheme, with a sense of timeless elegance. The design gently speaks of the company’s Japanese ownership while creating a modern and future-focused aesthetic. The balanced design was executed with a great level of care to ensure that it seamlessly integrated into its surroundings, enhancing a beautiful space with a level of delicate and considered graphic restraint.

A delicate sense of illumination plays out through minimalist graphic installations.

Graphics are used to delicately complement the interior design scheme.

Graphics were intentionally positioned to fall across multiple surfaces, and conceal or reveal different spaces.

Perfectly placed signage to balance with the interior design features.

“Sophisticated, yet approachable. Beautifully intricate details. So minimal yet so perfectly expressive of the client’s identity.”

“The execution and elegance are top-notch.”