Located in the heart of Manhattan, the FDNY Fire Zone is an educational learning center that teaches visitors important lessons about fire and life safety, and provides a key understanding of the FDNY firefighters and EMS, their positions and tools, and how the FDNY responds to fire emergencies.

The theater’s narrow footprint had its own set of spatial challenges, limiting audience size and seating viewers close to the set.

The room needed to include a dramatic walk-in sequence, an introduction that would prepare visitors (primarily children) for the experience, eight different cautionary stories (before, during, and after the fire), escape plan tutorials, and an entry to a smoke corridor.

The project included one interactive, three linear media pieces, and a pre-show introduction to the immersive educational theater.

The theater features eight different fire scenarios and educator tools such as escape plan videos and a heat door demonstration. The theater elements are individually programmed, allowing the guides to choose moments and sequences appropriate to the current audience. 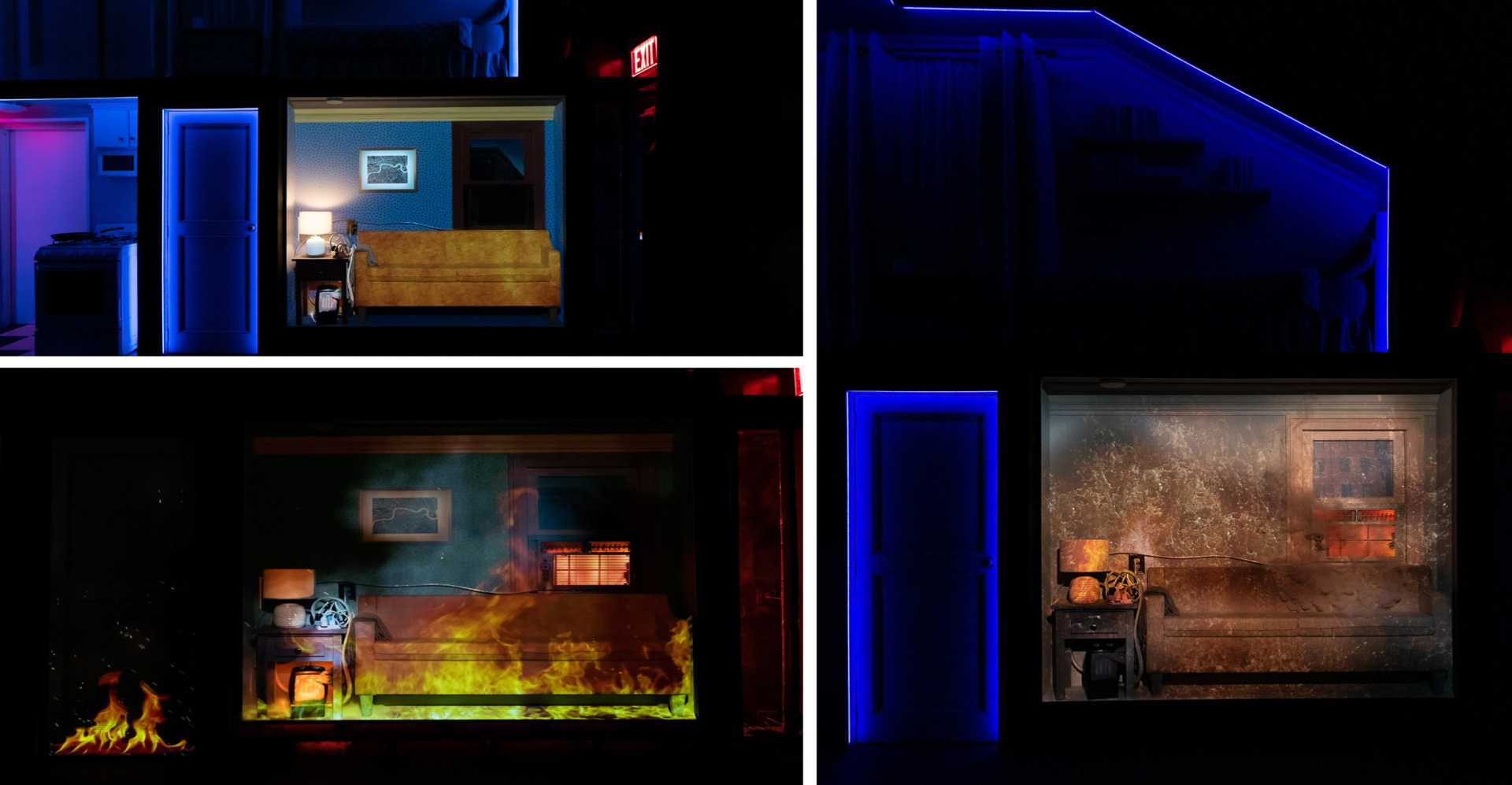 Living room: Before, during and after fire images using 3D mapping with projection, lighting and efx.

Theater set with lighting and projection; Image on the right shows the projected burned out bedroom in theater set.

The 2020 opening of the FDNY Fire Zone signaled a new beginning for this education center. Having moved locations the new Fire Zone offers an exciting and enriched program and design layout.

Each room was carefully mapped with a projection grid so that the projections seamlessly aligned with the set. The set elements, lighting, projection, and sound worked as a cohesive and tightly choreographed experience. The touch panel control system gives the firefighter educator flexibility to customize the experience for audience size, age, and season. The result is a meaningful, engaging, and accessible experience where all ages can learn the essentials of fire safety.

Visitors can try on turnout gear, sit in the jump seat of a full-scale fire engine truck and listen to real conversations between officers, dispatch, and firefighters on their way to an emergency; there’s a large projection detailing the unfolding of an emergency event.

The result being an important, engaging, and accessible experience for all ages to learn the essentials of fire safety.

Bedroom theater set before and during fire. 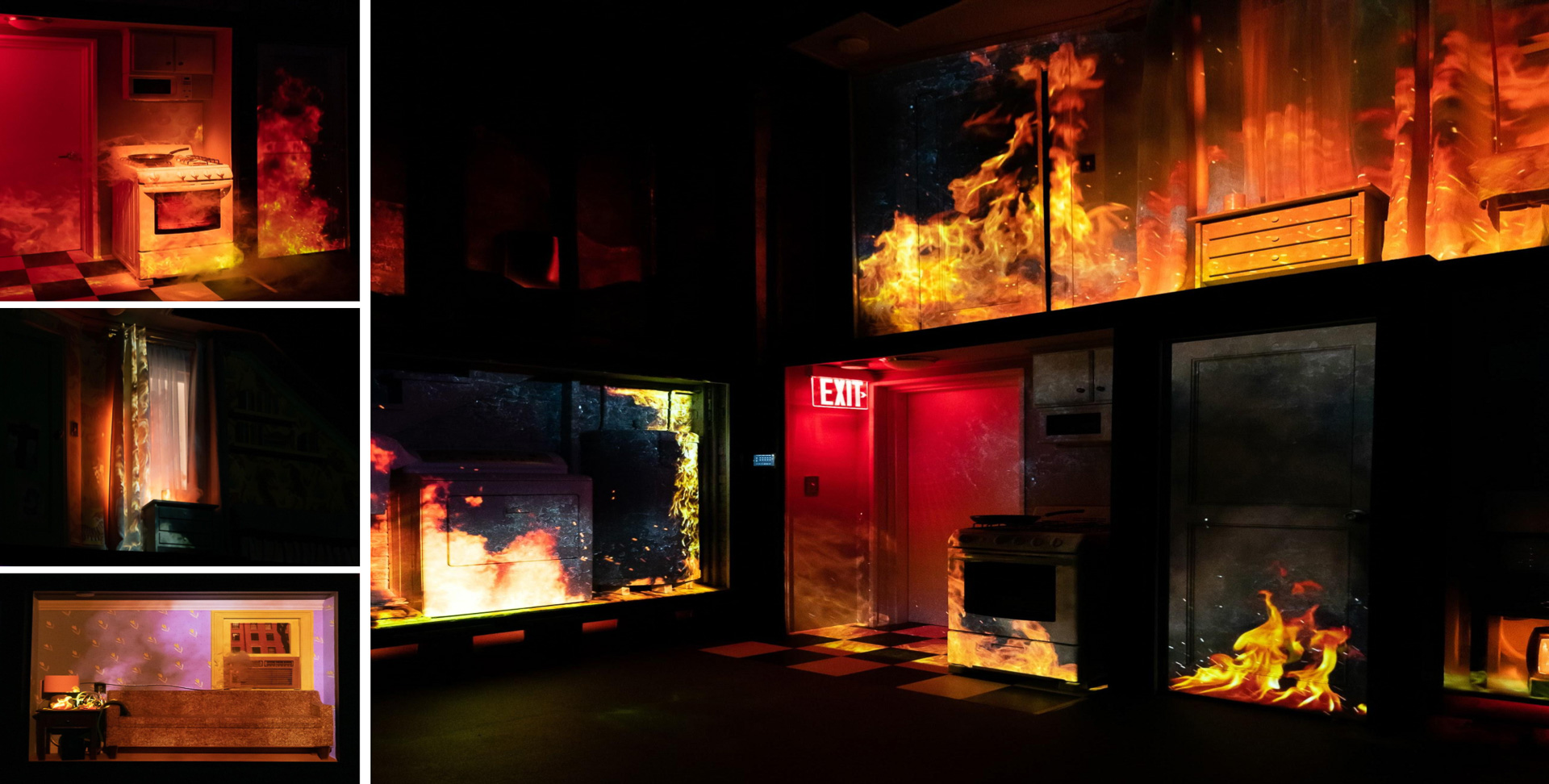 Living room: Before, during and after fire images using 3D mapping with projection, lighting and efx.

Theater set with lighting and projection; Image on the right shows the projected burned out bedroom in theater set.

Bedroom theater set before and during fire

“I loved the theatrical aspect of it and appreciated its intent to educate and create awareness about FDNY.”

“The highlight of this exhibit was the immersive theatrical space that is a truly memorable classroom for life-saving knowledge and skills. Creating a shared learning experience for kids helps them become more informed and responsible citizens.”

“I love this project because it used the exact right amount of media, human touch and scenography to make a potentially scary topic understandable and create a lasting impression on the mostly young audience. Abstracting the set but using real audio from emergencies and a live firefighter educator created just the right impact to bring the story across.”

“This year, we saw a trend of immersive, large scale projections incorporated into many projects. This project really distinguished itself, because it was so clear to us how they were able to create the visceral experience of how fire spreads through a physical space. This is a very effective use of projection mapping to create a memorable, educational experience, and share information that might actually help save your life someday.”

The Incas, Treasures of Peru